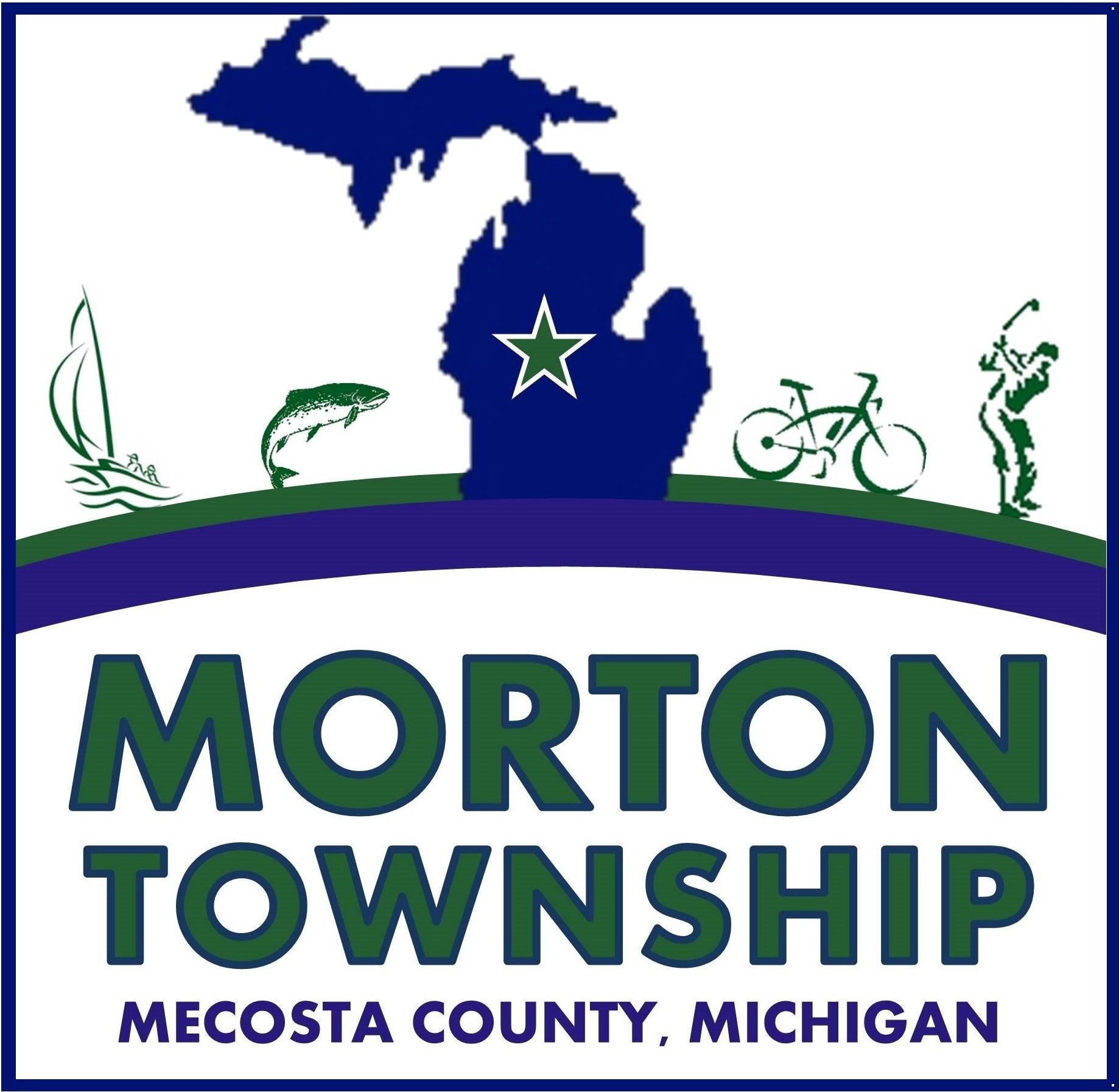 This history is from the Mecosta County Portrait and Biographical Album by Chapman Brothers, Chicago, 1883.

Morton Township is numbered 14 north, of range 8 west, Congressional survey, and is bounded on the north by Martiny Township, on the east by Wheatland Township, on the south by Hinton Township and on the west by Austin Township. The Little Muskegon, its East and West Branches, and smaller tributaries, drain the township. In the western part are four good-sized lakes, and two smaller ones. the large ones are named Round Lake, Long Lake, Blue Lake and School Section Lake. The last named derives its name from the fact of being partly on section 16, the section which in every township is set apart for the benefit of the schools of the State. The recently constructed Detroit, Lansing & Northern railroad passes through the northeastern portion of the township.

The first mill was built by John Van Vleck & Son, at Palo, Mich., on the north side of the Little Muskegon River, and afterward moved about four miles north of Mecosta Village, where it is now run by charles Van Vleck, John Van Vleck having died in 1880.

Back when the village of Mecosta was a little over four years old, it owed its existence and prosperity to the construction of the D. L. & N. railroad through this county. The opening up of a rich agricultural and lumbering district, by this road, made a station near the center of the county, where several years previous a large number of hardy tillers of the soil had settled to the south and east, and already had many thousand acres of land well under cultivation, an absolute necessity; for the farmer needed a market for his grain and produce, as well as a place to purchase supplies, while the lumberman needed a shipping point and base of supplies in order to carry on the business of manufacturing the sturdy pine (of which there is an immense forest to the north) into lumber, lath and shingles for transportation over the new railroad. Foreseeing this necessity, Weber Bros., of Ionia, who also had a large interest in the pine land at this point, E. B. Moore, of Edmore, and Giles Gilbert, of Stanton, formed themselves into a stock company and platted what has since been known as the village of Mecosta. The plat, which was duly recorded July 17, 1879, contains 120 acres, and is beautifully located on the East Branch of the Little Muskegon, at the junction of the Alma and Clinton State road with the D., L. & N. railroad, 16 miles southeast of Big Rapids and 12 miles northwest of Millbrook, and is about four miles east of the geographical center of the county. The company gave Amos S. Johnson, formerly of Sherman City, full power of attorney, and made him the resident agent for the sale of lots.

At that time nearly the entire plat was heavily timbered, although the greater portion of it is now cleared. The first lot was sold to Charles Cummings, of Stanton, shortly after the plat was recorded. The first building was put up by D. O’Brien about the 1st of October, 1879. H. W. Basingwaite, George Evans and A.S. Johnson put up buildings the same month, and John Van Vleck and son commenced the creation of a steam saw and shingle mill. During the fall and winter of 1879-80, several more buildings were put up by actual settlers, but not until the first of May, 1880, when trains commenced running regularly over the new road, did the young village experience a healthy growth.

The first store was a general grocery and supply store, kept on Main Street, where is now Parks Brothers’ hardware store, by H.W. Bassingwaite.

The post-office was established in December, 1879, and John Van Vleck was appointed Postmaster. His widow is now Postmistress.

The first hotel was opened by Ephriam LeGrange, in 1879, and christened the Mecosta House. It is on the corner of Main and Weber streets, and is now kept by Dominick O’Brien.

The village was organized as a school district in 1879, and the school-house, begun in 1880, was completed in 1881. This was a log building, and the first school was taught by Mrs. M.A. chipman. the same year, the present nice frame schoolhouse was completed, at a cost of $2,000.

The first religious society was of the Baptist denomination, organized by John Van Vleck, and held its meetings in the log school-house. In the fall of 1880, the Methodists sent a minister by the name of Hoag, who remained about one year, also preaching in the log school-house. Rev. J. Berry at present holds services in the town hall, but the society is preparing to erect a church on the west side of the river, at a cost of $2,500.

The first and only bank is the private bank of Gilbert & Wixson.

The Mecosta Planing Mills were built by Rathvon Bros., and started in the spring of 1883.

The business interests of the village are represented by the following firms:

Among the professional men are C.B. Pattison and J.H, Waller, physicians, and N.W. Bush, lawyer.

The last school census of the village contained the names of 225 children of school age, which would indicate a total population of nearly 800.

Click the links below to view different history galleries!

Development of Village of Mecosta

Morton Township is an equal opportunity provider and employer.